Book review: With the old breed by Eugene Sledge 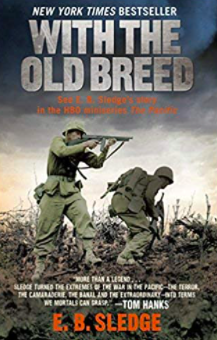 Readability:  The language in this book makes it easy to read as Sledge has a natural affinity to writing. However, as the book includes dates, maps, locations, troop movements, numbers and detail it is a slower read that will often require you to double back on a page or on a detail. Do not let this dissuade you though as this is one of the finest books you might ever read.

Eugene Sledge has been called one of the greatest war writers of the Second World War. In his book ‘With the Old Breed’, Sledge recounts his time spent in the Pacific Campaign fighting for the United States. This book undoubtedly at times is gut-wrenching, uplifting, sad, and thought provoking. Sledge writes about the smaller details in the war like the expressions on men’s faces or the smells and sounds of battle. To read this book takes a lot of focus as Sledge gives accounts of battle times, dates, names, locations, key events and troop movements. As a reader you cannot help but feel emotionally invested in the men that surround Sledge and the intricate detail in which the author writes is almost unparalleled in the WW2 Non-Fiction arena of books, so be prepared for some heavy reading that is at times unsettling. This book gives life to some of the events that took place in the WW2 Pacific Campaign and is an eye-opener for anyone who is new to reading war memoirs. The name ‘With the Old Breed’ refers to the older men who are in Sledge’s unit, men which he sees as ‘the old breed’, as they are from an older time. Sledge sees these men from a generation before him as having qualities and character which were quickly changing in a developing world of the 1940’s.

Audience: This is for mature readers.

Conclusion: This book stays with you forever. There are key moments and events which you will never forget and whenever someone mentions the book ‘With the Old Breed’ there is surely some things that will come to mind.