Ship wreck looting. Why does it take place? 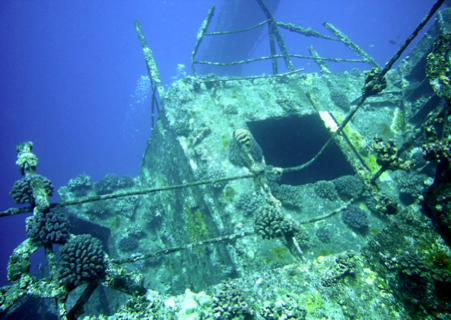 Ship wreck looting and the search for un-radiated metal.

In recent years the looting of WWII ship wrecks in Asia has attracted the attention of international authorities.  Many of these WWII wrecks are under-water museums, dive sites and conservation sites. Not to mention the final resting place of hundreds of sailors and civilians. So their significance and preservation is seen as important.

These predominantly military ship wrecks were both made and sunk before the earth had seen an atomic or nuclear explosion detonated on the Earth’s surface. Thus the steel within the wrecks is seen as being ‘un-radiated’ or ‘less-radiated’ as steel that is now extracted from the earth. Being underwater has essentially preserved the integrity of the metal from radiation at the same level as they would have been exposed to above the water.

Steel that has not been exposed to radiation is more highly valued as having no or less radioactive contamination.  Also known as (Low-background Steel). Other metals such as bronze and copper have also been extracted from ship wrecks.

High grade metals can be used for the construction of complex equipment such as Geiger counters, medical equipment, telescopes, satellites, rovers, computers and clocks. This has driven the demand for a search in metals elsewhere than on the Earths surface, and subsequently now below it.

Most WWII ship wreck looting is being documented in Malaysia and Indonesia.

Which countries have been affected?

The Dutch, Australian, British, American and Japanese governments are all trying to work with Malaysian and Indonesian authorities to help identify and condemn the looters.

Examples of ships that have been looted:

Note: The British government considers the ships military graveyards as they contain the resting place hundreds of perished sailors and civilians.

Note:  The looting of the Dutch ship HMAS Java causes upset in the Netherlands.

HMAS Perth has been looted.

The USA and Japan both also have underwater wreck sites that have shown signs of looting.

How is the looting taking place?

Efforts have been made in both Malaysia and Indonesia in co-operation with international authorities and experts from the Netherlands, Australia and Britain to catch looters. Despite this nobody has yet been able to successfully identify or apprehend large scale salvaging or looting crews. Although WWII wreck steel has been found in scrap-yards in both Malaysia and Indonesia there is yet to be adequate ability to source, track and find guilty the perpetrators.

Who is undertaking the looting?

There is evidence that local fisherman along Indonesia’s coastline have undertaken small scale salvaging. Small pieces of old wrecks have turned up for sale. Despite this, the scale of the ship wreck looting taking place, exceeds the abilities of humble village fisherman. To undertake the large-scale wreck looting/ salvaging, the offenders must have complex equipment. At the very least a winch and barge.  Such large sections of wrecks have been removed that their estimated weight is in the tonnage. This would mean that such an operating would take planning, time and equipment and manpower.

Looting has been increased in recent years with noticeable increase from local divers, which has been escalating in 2015. Sources say an estimated 4000 tonnes of materials has been removed from the seabed, but real figures could be higher.

Experts have commented that accusing Indonesia of failing to protect the shipwrecks is unfair. Since 2010 Indonesia has placed all WWII shipwrecks under protection, but has yet to be able to fully enforce the rules. Natali Pearson of the Sydney Southeast Asia Centre at the University of Sydney says “Ultimately, the vessels were in these waters to defend colonial interests. And there’s been limited co-operation over the past 75 years between the Allied countries that were involved and Indonesia”. Essentially handing over custodianship of WWII shipwrecks to Indonesia or Malaysia as ‘their problem to deal with and preserve’ and holding them responsible for preservatiob. Doing so would cost Indonesian and Malaysian governments time, resources and money, so it is unsure if ship wreck looting will ever be adequately stamped out.

Outside Asia other countries are also finding ways to garner valuable metals. One such source is the scuttled German WWI Fleet at Scapa Flow, which sank in 1919 off the coast of Scotland. Although, the search for un-radiated or low-background metals extends beyond just shipwrecks. As demand for complex medical and scientific equipment increases, so too may the upheaval of artefacts across the globe. In Boston 3 tons of lead was removed from old sewer systems and some countries have ripped up old rail lines for re-use.

So what does the future hold for WWII ship wrecks? The answer is unclear. While ship wreck looting is profitable is it likely to continue, but hopefully some sites can be adequately protected before irreversible damage is done.

Did you like this article? You may also enjoy: