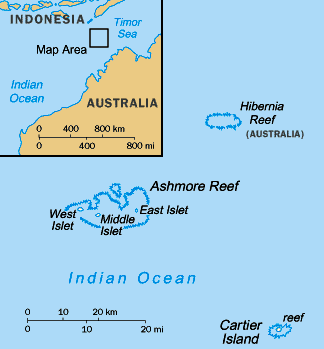 Australia and Indonesia are both geographically very close in proximity within the Pacific Ocean. Australia is a country comprised of 8222 islands. Indonesia of 17,508 islands.

Australia lays claim over 7 overseas (offshore) territories. They include;

In 1973 a Memorandum of Understanding was signed between Australia and Indonesia which allows Indonesian fisherman to operate and use parts of Ashmore reef for resources, and to use Ashmore islands to visit grave sites, seek shelter and collect freshwater. This is how Australia and Indonesia now share the islands. This system has so far proven to have worked for both parties.

In 1983 the Ashmore and Cartier islands was declared a nature reserve under the National parks and Wildlife Conservation Act 1975. This now comprises an area of 172 square kilometres.

Within Ashmore Reef and Cartier Island there is a varied range of biodiversity and rich marine life found. This includes sea snakes, sea birds, sea turtles, dugongs, whale sharks, dozens of species of coral, sponges, molluscs and dozens of species of fish. Landing on Cartier Island is prohibited, and the Australian government has advised that it may contain unexploded ordinance as it was once used as a defence practice area.

Australia is trying to take a leading role in marine conservation after years of public backlash for the health of the Great Barrier Reef. In 2021 the Australian government announced it would create a huge marine park covering 740,000 sq km encircling Christmas Island and Cocos Keeling in the Indian ocean. Earlier in 1975 the Australian government created the Great Barrier Reef Marine park, and now with the GBR’s health in decline has created the ‘Reef 2050 plan’.  The Ashmore and Cartier Islands although far from shore are linked to West Australia’s reef system by the south flowing Leeuwin Current. Offshore Cartier island lies the wreck of the Ann Millicent which is exposed at low tide.

The Ashmore islands have been used in the 21st Century as a landing point for people smugglers attempting to get citizens into Australia for asylum. Making landfall on foreign soil places people in the duty of care of the government. This meant that because of the Ashmore Islands proximity to Indonesia it was an opportunity for people smugglers to attempt to seek asylum by stepping foot on the islands, thus making claim to having set foot in Australia. Due to this the Australian government passed a revised plan of the Australian Migration Zone, excising the Ashmore and Cartier Islands in an attempt to de-legitimise peoples attempts at gaining asylum there.

Do you enjoy learning about the map? You may also like: